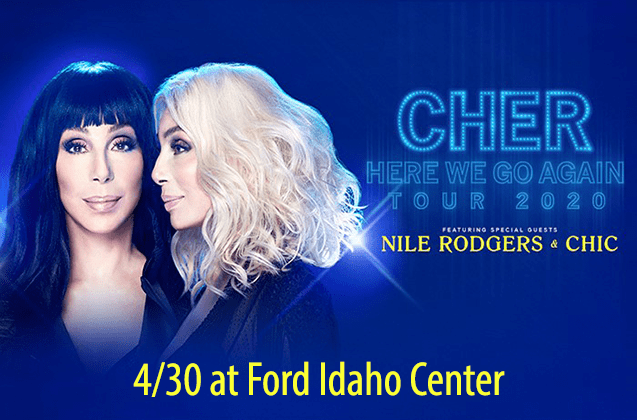 Due to the Covid19 Virus Outbreak this has been postponed until 10/8/2020. Contact the Venue for refund or details.

Nile Rodgers & CHIC will continue as the special guest for the North American outing. Produced by Live Nation, the newly announced dates kick off March 6 in El Paso and will visit cities including Memphis, Miami, Kansas City before wrapping in Sacramento.

Citi is the official presale credit card of the tour. As such, Citi cardmembers will have access to purchase presale tickets beginning Tuesday, November 5th at 10am local time until Thursday, November 7th at 10pm local time through Citi EntertainmentSM. For complete presale details visit www.citientertainment.com.

Cher will also be performing on the season finale of Dancing With The Stars on November 25th.
Simultaneous to the announcement of additional tour dates, Cher has just released a new fragrance Eau de Couture which she has been working on for the last four years. It is available exclusively on ScentBeauty.com. “I made it for people who love perfume, want to smell good who feel that it’s part of who they are, “ commented Cher.